The trend of having excessive tattoos on your body is a thing of the past. The craze of excessively filling your body parts with ink has dipped in the coming years. This may be the result of a generational change that fixates more on abstract art and minimalism. And so, the generational shift, which is quite evident amongst the younger population may have  something to do with the rise of fish tattoos since fish tattoos are mostly small and come under the categories of minimal tattoos, unless you get a bigger fish tattoo. Fish are eye candy inside aquariums because of their vibrant colors that glimmers against the light. This is just one of the reasons why fish are an excellent choice of tattoo art.

Fish have been around for millions of years. These aquatic life forms have served humanity in countless ways. Most importantly as crucial food sources for not just the people but also any animal that inhabits the area surrounding large water bodies like lakes, river or sea. This is not the only reason why you should wear an inked fish on your skin. The fish also has great reputation to some ancient cultures that place great value in the writings of archaic tabloids found in  Egypt that talk about the Anunanki Gods, Who share resemblance to the fish.

According to evolutionary biology, Fishes were the first life forms that made the transition from water to land and so no life on land including us would have existed without the FISH. All this evidence points to you having an aesthetic looking fish tattoo that looks unique and grasps attention of the public. This article will further elaborate what the fish tattoo symbolically represents in different cultures and which ones suit your personality.

The Meaning behind Fish Tattoos

The fish can be found in prehistoric literature in the form of symbols. Carved between stones and inside caves that remain as ruins. The historic magnificence of the fish predates civilization. The symbol of fish was also seen in early Christian art which dates back to the 2nd century AD. It still holds significance in Christian literature because the symbol of fish is used as a reminder of the believers. It is also a reminder of Jesus Christ.  Therefore, the fish tattoo can have a strong symbolical presence that has lasted for more than a thousand lifetimes, Predating to the biblical era. Its importance is cemented in the biblical scriptures and Ancient Sumerian carvings on the stone. Why not have a tattoo that has so much historical significance?

The fish tattoo may also attract people that share a deep sense of the fish’s characteristics, it is a creature that swims for hours looking for food while instinctively dodging and hiding from prey. Its cold-blooded nature means that it adapts to unwelcoming situations. It emblematically presents characteristics of being cold, adaptive, and resilient. Therefore, a fish tattoo depicts a personality that the feelings of distress or disappointment don’t affect much. A personality that does not let feelings overwhelm him or her and always strives to survive in difficult situations. One that quickly learns to adapt to whatever situation presents itself.  If you share similar characteristics as above, a fish tattoo could be a reminder of your moral responsibilities and help you in times of crises.

People that may resonate most with the fish tattoo are Pieces and Aquarius, according to popular opinion. The Fish tattoo portrays immense change, knowledge and wisdom; it puts emphasis of the two coinciding ideas coming across each other in the light of duality. Pieces sign is two fishes swimming in opposite directions, which means embracing opposing ideas and finding balance. Aquarius may reverberate to the fish because it is a water sign and being open to new ideas and experimentation is a trait that the sign encompasses. Even if you don’t believe in Astrology or don’t fall in the following zodiac groups, a fish tattoo could mean that you have high regards for these concepts.

Most Preferable Placements for Fish Tattoo

A fish is magnificent-looking creature; it has majestic distinctiveness and is visually appealing to the eyes. People usually perceive it in numbers rather than singularly. The best part about fishes is that they come in all shapes, sizes and color imaginable, and so, when you are looking to design your skin with fish, there is a lot of room for creativity.

Placements may vary considering the size of your tattoo. If you are looking to get a big fish tattooed on your skin, the tattoo artist can help you with suggestions on what may look the best judging by the physique and tone of your skin. However if you are looking to get a minimal fish tattoo, you can get it almost anywhere. From your wrist to between your fingers, a vast array of options is at your disposal.

For the subliminal tattoo lovers that like to keep their tattoo affairs discrete, Options like the arm can be a great choice because hiding it will be just a pull of the sleeve away.  For women, an interesting option would be a small fish circling behind the ear, which you can hide by just letting your hair down and tying them when you need to flaunt. Otherwise, if you are loud and proud with your tattoos, there is just so much you can do with fish tattoos, especially when you have so many vibrant colors to play with; it really depends on your preference.

Koi fish is a renowned Japanese fish. Not only will you have inherited a deep sense on culture by getting this tattoo but it will also look very aesthetic. The Chinese regard Koi fish very highly and they view it as a symbol of peace and wellbeing. It also gives the sense of good fortune. However, Men like to get red and black Koi fish, which symbolizes masculinity. Blue and White are another choice of colors to have when it comes to Koi fish tattoo. This combo represents son and family. You can view the gold colored Koi tattoos as symbolically representing wealth.

Koi fish tattoo are more commonly in black and white, this can work for people who want to go for a more decent and sophisticated piece of fish art.  Some people also like to have two Koi fishes instead of one to have a more poetic feel to the art since it represents the idea of two opposing thoughts as mentioned above.

Koi Fish tattoos can also be more vibrant and colorful because its scaly texture and long fins invites tattoo artists to fill each part with more and more color. This will appeal to anyone looking for a more multicolored tattoo that glistens in the sun.

A deep blue fish is the most exquisite and versatile idea of a fish tattoo. The deep blue color that everyone is familiar with brings out just the right amount of beauty. It is a great choice for girls; the deep blue color allows females to compliment it with any other color or makeup that looks well with blue. It also gives the subconscious effect of being in the deep blue ocean swimming with the fishes.

The color blue symbolically represents the feeling of being sad, which adds to the overall aesthetic feel of the whole tattoo. It also encourages the acceptance of grief as a mere part of life.  Its striking appearance makes it hard not to have it tatted somewhere where it can be most visible, like the arm, neck or elbow. The blue fish tattoo overall appeals to people who are in love with the color blue and thinks it looks best on them.

Sounds hysterical but why not! This Idea of a fish riding a bicycle reaches out to those that follow unorthodox ways of doing things. The whimsy and humor of it is surprisingly amusing. It also serves as a purposeful conversation started. It will most likely have people gravitate towards it with curiosity.

Anyone that wants to stretch the bounds of human creativity and step out of the box needs to consider getting this tattoo. Why? Because in this day and age, You can!,  It’s not much different than dark poetry, People will make sense of what they see, This piece of art can have people wander in their own minds as they try to perceive the meaning of what you have tatted on your arm. So, if you are the type that likes to entertain people, this may just work for you.

This tattoo calls out to all the people that have spent a great deal of their lives with the rod and the reel. Standing patiently and persistently, looking at the horizon that trails over the blue waters in search for fish. This tattoo is for the people whose fishing experience means more to them than just catching fish, it marks all the times they went head over heels for a big catch.

The love for fishing can be easily portrayed in ink with tattoos that display a fish and a rod; its design can be however you want it to be. This tattoo is the display of strength. It encompasses the man’s hold over the great sea and what we are capable of.

People are great fans of the Yin-Yang sign tattoo Why not just combine the great tattoo idea that already exists in the form of a Yin-Yang and incorporate the Koi fish in the circular design. It will make for a very creative and new idea that celebrates the two ancient cultures (Japanese and Chinese) together in an astounding play of art.

Just like any Yin-Yang circle, the black Koi fish can circle the white Koi fish and philosophy would still entail as the black Koi fish will represent the evil and the white Koi fish will represent the good. Each fish having opposite color circles on their head will symbolize the good in the evil and the evil in the good. It will not only look artistic but will also visualize the much celebrated philosophy of Yin and Yang which will remind you to keep your personality in check and maintain the right amount of balance when facing unnerving and catastrophic endeavors. 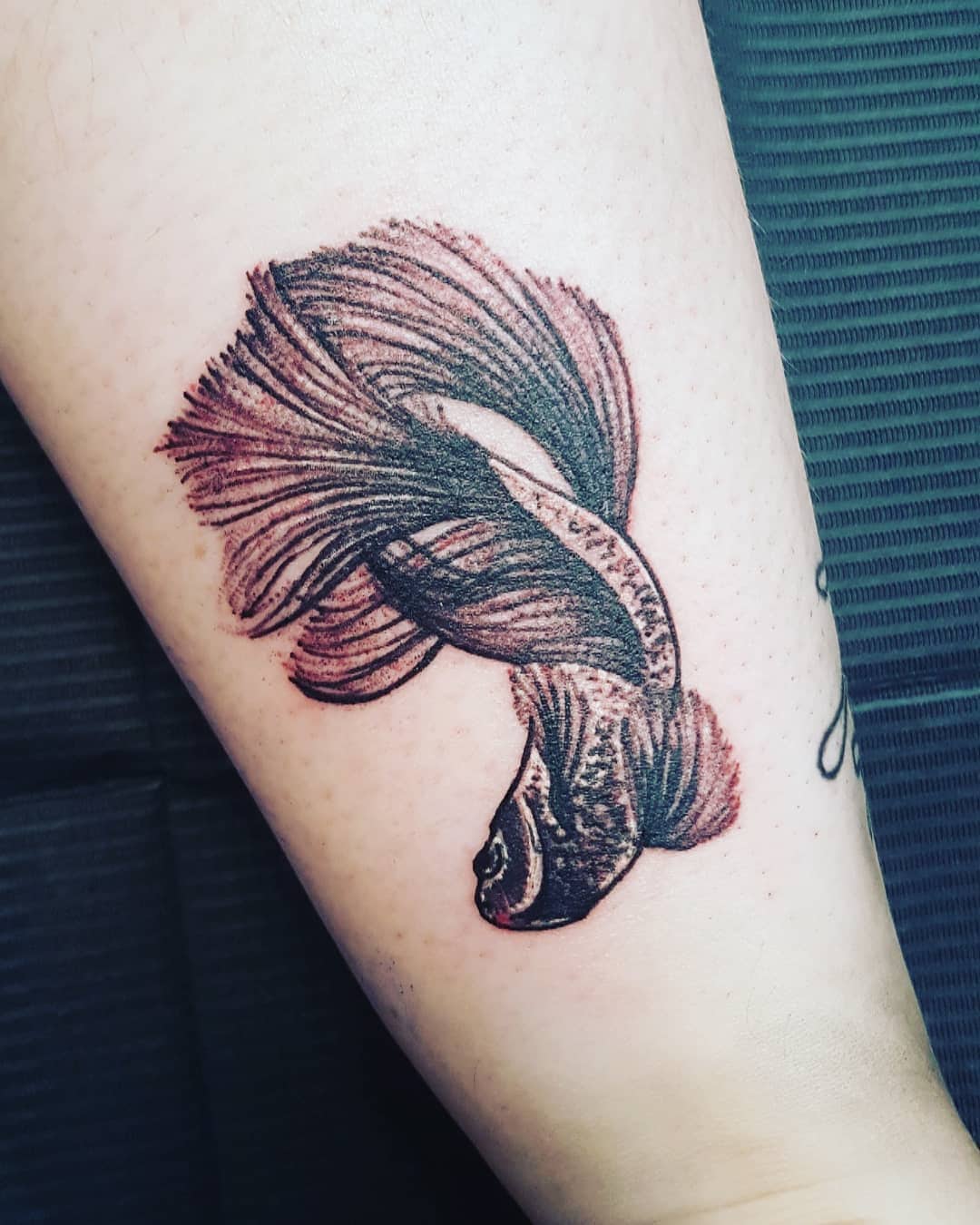 Is getting a tattoo painful?

The procedure of getting a tattoo will depend on where you are getting the tattoo and how big the tattoo art will be. The duration of the whole procedure accounts for how painful it is going to be. The more ink being pierced into your skin the more it will hurt.

How much does a fish tattoo cost?

What should I do before getting a tattoo?

You should avoid taking substances that thins down your blood and makes you susceptible to excessive bleeding, like Coffee, Alcohol or Aspirin. It is also good to stay hydrated before the procedure and moisturize.

Getting a tattoo is somewhat like taking a picture. However, pictures are a real time containment of a moment that shares a memor. On the other hand, tattoos are more like an encapsulation of everything that it symbolically presents. It triggers memories when you look at it, and stays with you as part of your identity. So, don’t just get a tattoo for only accessorizing but for what it represents and how it can improve the crucial and pivotal decisions in your life. A fish tattoo is so diverse with its implications in life and so deep when it comes to philosophically rectifying it that it is worth having tatted as a part of your identity.