Music is universal. Plenty of people consider it as a daily part of their lives. It’s very hard to find someone who dislikes music. Music deals with how a person is able to express their emotions to everyone around them, without speaking out loud. Some people know that music is the right way talk about things. It keeps you company when you’re by your lonesome, and makes you smile when you’re feeling blue. If you don’t know how to discuss your feelings about something or someone, you can do so with music. Music is also the number one source of expressions, and finding inspiration in anything.

Sometimes, people like music so much that they end up getting music tattoos on their bodies, as a symbol of their love. Music is a very common theme when it comes to tattoo designs. These can come in the form of notes, symbols, lyrics, or even a picture or name of their favorite artists. Others get a tattoo of their favorite musical instrument. A music tattoo is always a good idea for those who enjoy both.

Music tattoos carry their very own meaning. And as mentioned before, music is one of the best ways to express one’s self without saying something out loud.

For those who like all kinds of music – Be it classical music, country music, hiphop, etc. get a music note tattoo. A note tattoo could be any size you want, and be placed on any part of the body. The music note is one of the most common music-related tattoos. You can also get either one note, or several notes in a line. There are also plenty of music notes in existence, so you are free to choose which kind of note you want as a design – A G-clef, an F-clef, a full note, double note, or a half-note – The possibilities are endless.

Yet another popular choice for the musical tattoo design are song quotes and lyrics. Although lyrical tattoos are considered similar to quote tattoos, it’s still very interesting to see lyrics given a lovely, artistic look to it. Some lyric tattoos could be very simple, but some are combined with other symbols that could hold an even deeper meaning to the person who has it. Maybe the lyric has had a huge impact on their life, and they want to commemorate this by getting it inked on their skin.

Meaning of a Music Tattoo

Music tattoos, especially musical note tattoos, are placed together alongside other notes and symbols which could look like a musical piece, inspire others to create ideas, or even represent a certain initial since musical notes are translated from letters A to G. A lot of people choose musical note tattoos since people recognize this symbol very well. Both music fans and musicians pick music notes as a tattoo design since it represents their passion and love for music itself. Meanwhile, others may choose it since it’s a classic symbol which can be incorporated in other designs, including hearts, flowers, and stars.

Plenty of music tattoos carry tons of meanings, and they all depend on the person who owns the tattoo, as well as the artist who created it. But the meaning of tattoos connected to music, as well as the person who got to tattoo since they value music so much, This could add to one’s own humanity and life at large. Because plenty of people enjoy music, they like getting music-related tattoos as well.

Preparation Tips for Getting a Music Tattoo

No matter if you have chosen to get a music tattoo, or any type of tattoo, you still need to follow a couple of hints to so you can prepare yourself when you step inside that tattoo parlor.

Don’t drink any form of alcohol the night before you visit the parlor. Alcohol thins your blood and make the tattooing process feel twice as painful. If you’re thirsty, just drink water.

It also helps to get plenty of sleep before the tattoo session. It could be hard to get some rest since you might be feeling anxious or excited about that appointment, but getting lots and lots of sleep can get you energized and relaxed the following morning.

Be sure you have enough cash to pay for your tattoo. You could also offer your tattoo artist a tip. Bring a bottle of water or some snacks in case you get hungry – Depending on the size of your tattoo, you could be sitting in the parlor for a very long time. 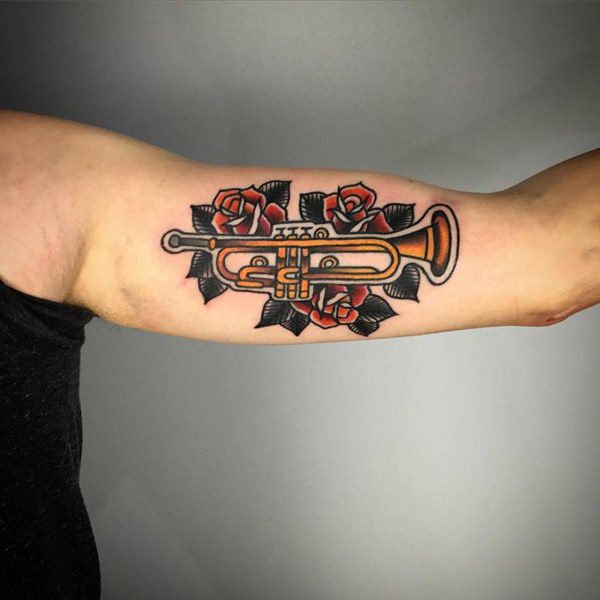 Ideal Placement of a Music Tattoo

Creating a good tattoo isn’t just about the design – Sometimes, its placement on the human body can make it look great too. There are times when putting on a tattoo on the right body part makes the whole thing funny, or even poignant. When you’re still thinking about getting a tattoo, you might have already decided which design to get, and which spot to place it in. The area where you put in your tattoo could carry a type of importance as well.

When it comes to music note tattoos, people apply them to their wrists, the back of the ear, the foot, or ankle. Tattoos with comprehensive designs belong on the back, the legs, the back or side of the back, the arms, and the chest. Choosing the area of your body where you place your ink says plenty of things about your personality. Sometimes, people place their tattoos in spots where no one can see them, or could be hidden by clothes – This is applicable when you have a high-profile job or attending a formal ceremony. This is highly important since body tattoos and formal clothing don’t necessarily mix, and creates a rather uneven look.

Average Service Cost & Standard Prices for Getting a Music Tattoo

Have you ever wondered how much the average tattoo costs? Before you head on over to that tattoo parlor, you must think about several prices you have to pay in order to get a music tattoo. Knowing these costs can help you save up just in case you decide to get one.

The average price for a tattoo is definitely not cheap, unless you get a temporary one or a henna tattoo. The pricing could climb up depending on your tattoo’s size, from $100 to $500. It could also depend on the artist – Whether they end up charging you by the hour, or by the size of the tattoo. The longer the tattoo process, the bigger the final price could be.

Keep your bandage on the fresh tattoo for at least an hour, but not much longer than five hours. Do not rebandage the tattoo unless the artists recommends it. After you get rid of the bandage, rinse it with lukewarm water, and mild soap. Pat gently with a paper towel, and allow it to air dry for an hour before rubbing lotion on top of it. The lotion should be scent-free. Lightly massage the lotion on to the skin, until it gets to the point where it doesn’t look moist anymore. Do not put in too much lotion on your fresh tattoo. Ointments should not be used on tattoos, since they contain a huge amount of petroleum. The petroleum can block your skin from breathing, prolonging the healing process. It could also possibly clog your pores.

During the healing process, rinse your tattoo using a mild soap and lukewarm water. Repeat the process for at least two weeks, depending on how fast your tattoo heals up. Sometimes, your tattoo will start to feel like a bad sunburn – Do not pick, scratch, or rip off the drying skin, or even over-saturate your drying tattoo in the shower.