You cannot mistake marine tattoos or Marine Corps tattoos with other types of tattoos designs as they are very unique. One can recognize the symbol of pride as soon as one sees it. These USMC tattoos are amazing and audacious. These are a tribute and a way to show admiration for the freedom fighters of the country.

You cannot take these ink art designs lightly. You have to follow a few specific codes and customs in order to get these. All those who are currently serving in the marines must follow and abide by the rules of tattooing in the USMC rule book.

You may be a part of the audacious US Military or one of those patriotic nationals who wish to pay tribute to the bravery of your valiant soldiers. Either way here is some advice and detailed information regarding the history, placement, and varieties of marine tattoos.

Since then many soldiers get themselves adorn with specific military tattoos to pay respect and show pride in their country.

However, soon the French stopped the practice of tattooing due to health issues; although, the trend of getting inked remained and prospered in the US. It got so trendy and fashionable that even the civilians started getting inked.

Moreover, people currently serving in the military may have to go through some paperwork and approvals in order to get tattoos on their body.

In comparison, the citizens don’t have any restrictions or rules to follow in order to get a tattoo. But when they decide to get one, they must know what the image on their body represents to fully embrace it.

Although residents are free to have a tattoo anywhere on their body, military soldiers have to abide by some laws and codes of conduct to get a tattoo.

Semper Fi- marine’s official motto is usually carved on the back or near the shoulder. Arms and legs suits for phrases, rank insignia, and customary symbols. Only a few people dare to get a huge piece of ink art on their body.

This is because you need to be patient and fearless to endure the pain from those needles. Marine tattoos are an association with those who have ties in the military or feel pride for their country. People with marine tattoo choices are heroic, noble and tenacious.

Variety of Marine Tattoos and their Meaning

The United States Marine Corps is one of the most prestigious and elite military forces in the world; and marine tattoos on their skin feel like a badge of honor and bravery. Due to marine tattoos, the history of more than a hundred years is intact on the bodies of soldiers in the form of symbols, phrases, and illustrations, which is great.

These kinds of tattoos also make the Marine Corps a well reputed and honored part of the US military forces, which is a great honor.

The good thing about these tattoos is that they are unisex. Both men and women can wear them because they have a symbolic meaning of loyalty to the country. There are various designs from which you can choose.

Also, you can decide on the shape and size, according to what you need. Below we will discuss a few of the most popular symbols and phrases that are the pride of Marine tattoos.

Anchor, Globe and the Eagle

A balancing eagle on the globe in front of an anchor is one of the iconic symbols of the US military. The eagle became a part of the Marine’s uniform in 1868 and then become an official emblem of the Corps in 1955.

Note that the symbolic meaning of the eagle sitting on the globe means that the US is forever watchful over the globe and the anchor represents marine ties with the US Navy. The enlisted are bestowed with an all-gold symbol, whereas the officers are supposed to use silver and gold sign.

The connection between these three bold symbols shows the promise of the Marine Corps to protect the country no matter where the problem is. May it be in the air, sea or on the land.

The Bulldog or the Devil

The history of bulldogs in the US Marine Corps symbol dates back to World War I. This was when Germans begin to mock the US military with the name Devil Dogs. This nickname was to insult the US military force; instead, it became the power of the US forces.

In fact, it gave the idea to the enterprising recruiter to get more recruits. These immense, fearless, bold, audacious, heroic recruits- the Bulldogs or the Devil dogs scared the Germans out of their wits.

They had to run away for the sake of their lives. The idea of recruiting new members proved to be one of the brave decisions, and since then every Marine Corp show offs his/her bulldog proudly and victoriously. Even today it is one of the triumphant insignia that represents that no one can defeat the Americans.

Semper Fi is an abbreviation of a Latin word Semper Fidelis. It has been an official slogan of the US Marine Corps since ages. The literal meaning of this term is “always faithful.” This term symbolically means and points to the integrity, brotherhood, patriotism, and unity among the Marine Corps.

It also symbolizes faithfulness to the country and serves it with loyalty. Usually, Semper FI is written ancient English texts, but you can change the font style according to your preferences and liking.

The Sword of the Kings

One of the most ancient yet sharpest weapons that are still used by the Marine Corps is the sword. It is a part of Marine uniform and soldiers use it as a saber. These swords never let the Marines forget about their past and always makes them celebrate what their forefathers did for them.

Due to its symbolic connection with the ancestors, it is popular for ceremonial purposes. Officers have permission to carry one of the most esteemed swords, Mameluke. This was a gift by Prince Hamet of the Ottoman Empire to Lieutenant Presley O’Bannon in 1805.

Armed forces have always kept the duty and honor first. Integrity and loyalty to the country and its people are the first and foremost motives of the Marine Corps. “Death Before Dishonor” is another popular jingle among the marines that outwardly points out to the obligation of security and safety of the country. Family and friends always come first even if it means your fall.

When the rifle is kept upside-down, and the boots are there, it makes the battlefield cross. This sign marks the grave of fallen soldiers. This practice began during the civil war in America. The respect and honor of soldiers is most important.

This sign symbolically means the mourning for a fallen soldier and similarly a celebration of the life and services of the fallen one.

If you are planning to get a marine tattoo, go for it. It is one of the ways where you can actually show your patriotism and your loyalty toward your freedom fighters and your country. We hope that by reading this article, you got some inspiration for your next tattoo.

Tattooing is a form of art that should have some personal meaning as well. So you can mix up a marine tattoo with a phrase, symbol or any other composition that links your feelings and your thoughts about the country with the marine design. It will also make something personal and provide you a reminder as well. Whenever you have a bad experience, and you start to complain about your country, this tattoo will remind you about what this country and those brave soldiers have done for you.

However, marine tattoos aren’t ordinary tattoos; so, make sure you go through the rules and regulation before carving one on yourself. Respect the significance of marine symbols and understand them first before paying a visit to your tattooist. 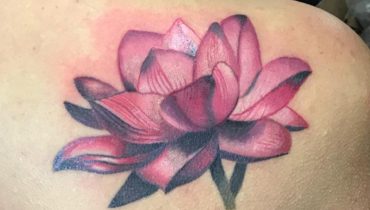